because Vegas is fun for kids too!!!

…and also maybe because you have no one to watch your children….ever……

We just got back from Vegas. Our third time with little ones. This time we took the 4 and 1 year olds. The older kids wanted nothing to do with this trip. I don’t understand how two teenagers would not JUMP at the chance to hang out for 5 days with two adults and two little ones… all. day. long.

Usually when I tell people I’m going to Vegas, they assume it’s just me and the hubby. When I tell them we are bringing the kids I am met with silence until that person realizes there is no punch line. “What??”… “WHY would you do that, WHAT can you DO with kids in Vegas???”

Well, once you get past the things you can’t do, like gambling, clubbing, seeing shows, or various naked opportunities….. there is plenty! Seriously, they don’t joke about gambling in Vegas. My husband and I don’t gamble to begin with, but the first time I took Sammy he was a year old. He wanted to see the lights in the casino so I walked up to a slot machine with him just to look at the lights and colors. It was morning, we were passing through the casino for breakfast. As I stood there, apparently off the specially marked trail, a security guard swooped down and yelled at me to step away from the game!! And then proceeded to tell me I could be fined thousands of dollars for letting my baby gamble. This is how I learned to stay off carpet in the casino area. Scary!!

Vegas itself is like a wonderland for the senses, the place is always ON, much like a toddler. We’ve been there during all seasons, and love it the most during Thanksgiving. The place is celebrating Christmas already and hotels all have their special themes, characters dressed up, music playing inside and outside, games, free shows. We went over Memorial day weekend this time, which unfortunately coincides with massive amounts of college kids looking to drink and party there as well. Other than one day that felt like our hotel was really a frat house, we still had a great time.

There are tons of things to do with your kids, and there are more and more families there every time we go. 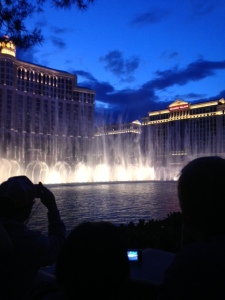 Bellagio. The fountains outside never get old. And they play frequently during the day and night. Even my 1 year old was mesmerized by the dancing water, especially at night with the lights making it look more magical. We stopped there every day.

Bellagio also has an amazing area off the main lobby to walk through, their botanical garden. They change the theme with seasons and we always enjoy seeing what the next look will be. Probably the baby does not care at all about this, but the adults and even the 4 year old enjoyed it. The hotel is HUGE. We can explore all the main halls, containing conference rooms and ballrooms, the outside public patio, and end up having ice cream or tea and pastry in this hallway that we end up looking for and finding each year. There is also a huge chocolate fountain, behind glass, that takes up part of the ceiling and a wall in the Jean Philippe Patisserie. This is located just past the botanical garden area. VERY expensive, but fun and delicious. They have all sorts of candy and ice cream. 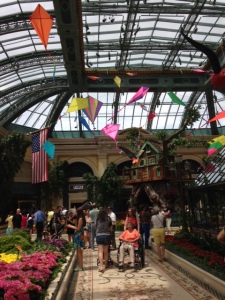 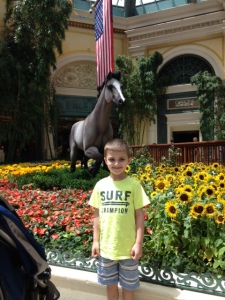 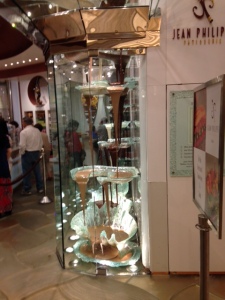 Besides Bellagio, there are plenty of other places to take the kids for free entertainment. Ours loved the aquarium located in the Forum Shops at Caesars Palace. There is also a show in this area about the fall of Atlantis, using animatronic figures to depict the King of Atlantis and his two bratty kids. Daughter who rules the water, and son who rules fire. Skip to the end, they can’t agree on who should rule the kingdom, so all perish in a fiery/watery death as a big bird, maybe a dragon??, attempts to drag the King away. There is no real violence, it’s just suggested, the figures really just lower back down into the ground. It’s really not scary by my kids standards, but there were a couple kids crying in front of us. Mine liked the lights, and flashes of fire and bursts of water as the son and daughter bickered about who should rule the kingdom. 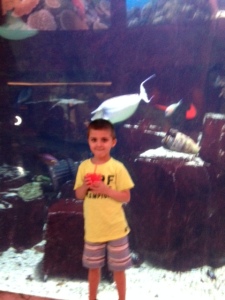 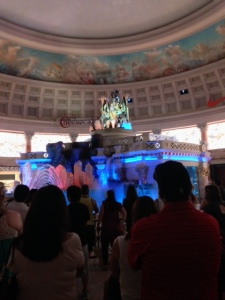 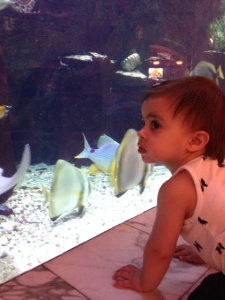 Other shows are outside, like the Volcano show at the Mirage. It’s basically fire bursting set to drum beats that build in tempo until a big finale. This is one we kept trying to take the kids to, but they were always asleep in the stroller by the time we got there. I have watched it close up, as well as from across the street. I actually liked across the street better because it’s easier to walk away when it’s over, less crowded. Also, the end of the show features a huge burst of fire from the main volcano, it is HOT. It’s even hot from across the street. 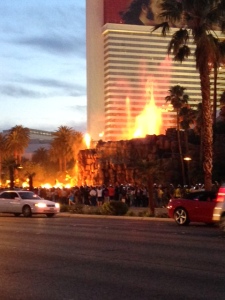 There are a ton of people dressed up as cartoon characters. Not to mention Victorias Secret “Angels”, bikers wearing pleather with buttless pants, and even girls topless with just their chests painted with Vegas slogans. Thankfully, we got no questions from the 4 year old. The baby was oblivious until someone dressed up as a very tall Yoda decided to come up to her and say Hi. She screamed like I’ve never heard before, I actually wish I had it on tape. Poor kid, scared the hell out of her. Then, the guy felt bad so he keep the mask on, and proceeded to try talking to her and waving from a  few feet away. We had to leave the area to get her fingers pried off of my neck.

The shopping malls attached to the hotels in Vegas are nothing like the malls at home. The Venetian features a Gondola ride inside as well as outside the hotel. We rode twice, and were serenaded by our, uh, boat person? with two songs for each ride. They sing very well, and the acoustics inside the mall really add to the sound. In addition to every store you’d want to see, the mall itself is decorated like you are actually outside in Italy. the ceiling is made to look like blue sky with clouds, there are cobblestone “streets”, and cute storefronts made to look like old time buildings. The mall at Paris and Caesars are similar. There are areas inside all of these places with some form of entertainment or another. Portrait painting, people dressed in costume, tons of restaurants and gelato stands, as well as the unique offerings of each place make them all worth visiting. The kids were not bored, finding too many things to look at and do. There are fountains EVERYWHERE, so we probably threw away part of my retirement in pennies and nickels for the kids. 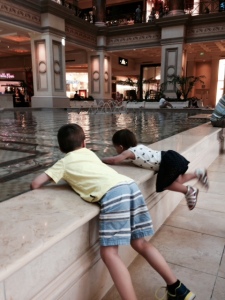 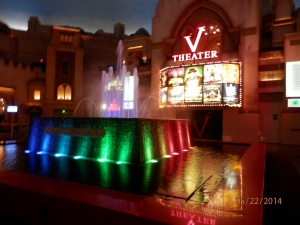 Of course, there is swimming. I’m not a big swimmer, hate to wear a bathing suit. I did it for the kids, and they loved the water. The Venetian has several pools, no bells and whistles for the kiddies, but there is one pool that ranges from 1 foot to 14 inches deep only. We stayed there, and both kids were in their glory. Sammy pretended he was swimming by just floating on his belly and walking with his hands on the bottom of the pool. Jenna tried to drink the entire thing, tried to back float, and screamed like a banshee whenever I tried to remove her. 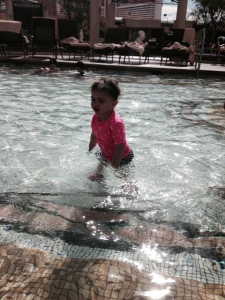 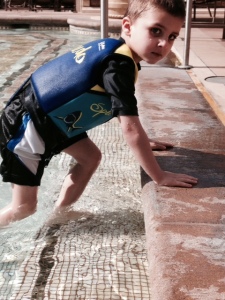 Visiting other hotels is worth it, they each have a theme and usually some attraction that draws people to check it out at least once. EVERYTHING is done over the top. We also rode the “high roller”, the worlds tallest Ferris Wheel. For the 4 of us, it would have been about $100 to go at night, and it cost about $70 to go during the day. You have to either buy tickets ahead of time and reserve a time, which scared me with trying to plan what the kids would feel like…. or you can go and wing it, buying tickets before you board. It’s always busier at night because Vegas looks amazing all lit up. It takes 30 minutes to get up and back down. 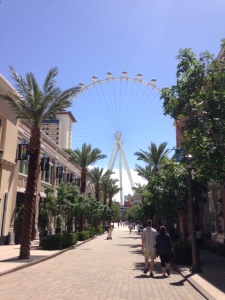 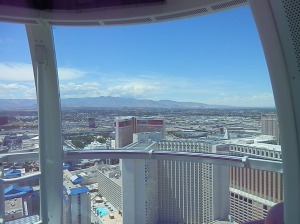 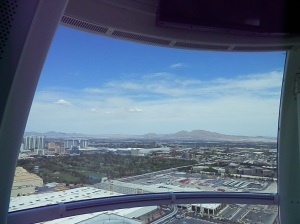 Everywhere you go, people are pointing cameras and snapping photos. I do the same thing, no matter how often I go. 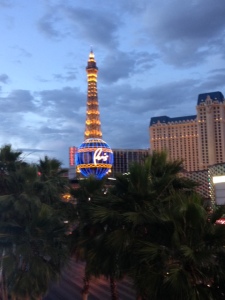 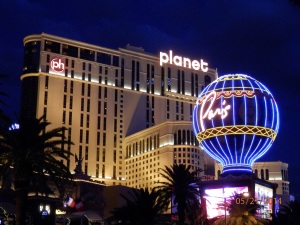 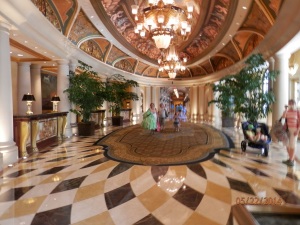 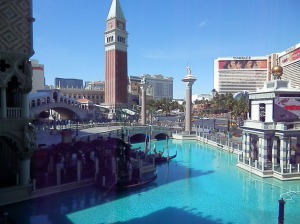 We made it through our trip, snapping photos like the savvy tourists we are….. the only thing I felt bad about was the lack of pictures featuring ALL of us together. I’ve got plenty of myself or my husband standing in front of this or that, holding one or 2 struggling children who refuse to look at the camera, at least not at the same time. Then, we had a MOMENT. Just accidentally playing with the iPhone and snapped a beauty, we were all facing the same way, and no one was crying! 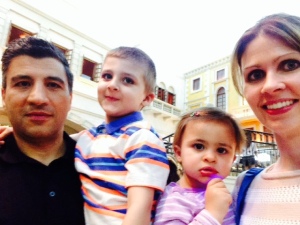 So….go. Take your kids. I may see you there!

2 thoughts on “Why do people take Kids to Vegas???”