One summer, back in the days when I had time to watch movies, I came across my first taste of Bollywood.

An Indian drama involving a man, a woman, another woman, her brother, the British, an Indian village, and a Cricket match. 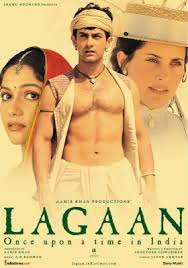 I was hooked. Passion stirred in my heart, I loved the characters, the story line, the dancing, the singing. The subtitles! I loved the subtitles, because it was not in English, which is a big turn off for some people, I know.

Drawback? It was long. It took commitment to watch, for 224 minutes. (that’s like, almost three hours).

I think the only reason I initially had the time for it, or any movies at that time was that I watched them while I studied at night, and everyone else was sleeping. I needed something on TV to keep me awake, but I loved the movie so much…I had to share it with my family. But how would they take to it?

With love. Lots and lots of Hindi love.

My oldest kids at that time were about 5 and 1. They loved the singing and dancing scenes, and begged to replay certain ones over. and over. and over.

Then came the costumes.

Rachel needed a Sari. And the Bindi for her forhead. Both purchased on Ebay, thank you very much.

It wasn’t long before she had memorized the songs, and the dances to go with them. The kids would ask for “the stick dance” (really, watch the movie, you’ll get it). She’d run and get her costume on, and they would grab the Lincoln logs to use as the sticks in the movie. Watching them dance and enjoy it was so funny, and I really couldn’t believe they would actually watch the rest of the movie too. Not all at once, but pieces and parts.

After Lagaan, came a plethora of other Bollywood films. I bought another of my favorites, a bit more modern: Monsoon Wedding. Not as appropriate for kids with it’s more adult story line, including an extra marital affair, an arranged marriage, and a shocking revelation of child abuse. HOWEVER…. also loved it. Watched it lots of times. I DID also share the singing/dancing parts with the kids. Hmmm, maybe I’ll have to stay up super late and watch that one tonight…….

Funny thing, it’s been years since I had the time to watch any of these movies. The other day it just came to me, maybe I was sick of watching “Potty Power”, which the toddler loves to have on in the background. “Hey guys, I have something you are going to LOVE!”…. ran and found Lagaan, and popped it in.

I was amazed to find the 17 year old and 13 year old STILL love it, complained even when I just skipped to the dance scenes for the little ones. And the youngest two?? How did they like it?? 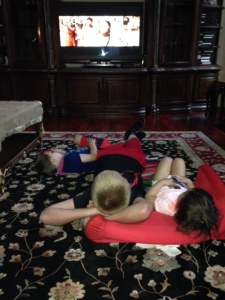 Well, it makes them break into spontaneous and often very weird dance moves, but they absolutely love it as well.

So, I’m glad the subtitles don’t get in their way of enjoying a film. I love that they are all open to experiencing a glimpse of other cultures, not just the one or two we are familiar with at home.

Will my love of Bollywood help make my kids more culturally aware, and therefore more accepting and open to all people, from everywhere?

It’s a baby step, and a fun one at that.