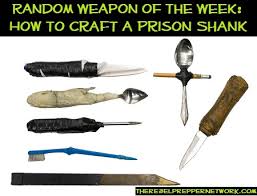 We were all in the car together, the two youngest focused on their Leap pads and the two oldest just…..talking with me. At some point, a joking comment was made about “shanking” someone.

“I wonder what’s the difference between shank and shiv?, do you guys know?”

17 year old seems to think they are the same thing….something sharp you use in prison to cut people with….right?

It seems like there must be a difference, to be called different names.

13 year old asks Siri. Gets directed to some web page, I don’t know what it was, I was driving as he read us the definitions.

We are informed that a shank is something you generally carve into something sharp to stab with, it’s one piece. Whereas a shiv is made out of objects you put together to form a sharp weapon, like taping your razor blade to a comb.

Then we discuss what would be better, carving a shank out of your toothbrush, or maybe a broom handle (yea, that’s a good one!) or making a shiv. Seems to me that making a shiv is a bit less work, somehow not as respectable as taking the time to carve a good shank. Then some healthy speculation about what objects you could get your hands on to make said weapons.

We wondered briefly if it was odd for us to be having this conversation…..but tempered it with the joy of learning something new.

Apparently, my children and I are not the only people in the world to have this burning question…. and there is some controversy among those who choose to offer enlightenment. Check out an extended discussion here: http://stuffijustlearned.blogspot.com/2010/11/shiv-vs-shank.html&#8230;..if you too want to make sure you use your prison terms appropriately. Here was a good comparison given by someone:

Really cleared it up for me.