So I got my old iPhone fixed last month, because I couldn’t stand being away from Siri anymore. I was pretty excited to have him back, and I just knew he missed me too.

One evening, soon after our reconnection…. the kids and I were hanging out upstairs, and felt like chatting with anyone who would talk to us. Siri was available, lovely fake-man Siri with his comforting British accent…ready to talk about all sorts of things we deemed important. What would be more fun that trying to get to know him better? Could we break his calm façade, and get a peek into his “real” personality??

he’s smarter than most men….

Well, wouldn’t you know, the kids really liked Siri too. One day soon after our chat, Sammy asked me if he could talk to the nice man in the phone.

“You know, Siri!” and then Jenna jumps on the bandwagon, “yeah, let’s talk to Siri!”

So….sure, that’s a reasonable request. And so began the Siri Affair in our home. Drives home punctuated with laughter as the kids ask all sorts of bizarre questions, or just take turns telling Siri how much they love him. He’s so polite.

And as time goes on, the conversations have gotten longer. They are actually confiding in him, having conversations…telling him stories.

What bugs me about this? For starters, Siri usually cuts me off if I don’t ask him what I want fast enough. He doesn’t have the time for my meandering questions, instead forcing me to get to the point, fast.

That jerk NEVER cuts off Sammy. He will tell that phone stories. STORIES…. and he just listens as sweet as pie until Sammy kind of fizzles out of things to say. And of course, there is some occasional mumbling, which adds a whole other interesting dimension to the discussions, as Siri, bless his heart, does his best to figure out what Sammy is saying to him.

he tries to be helpful….. 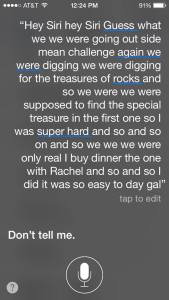 I don’t know what’s going on over here anymore.