Advice from a lady who survived

So I made it to Vegas….and back….with the two little ones. I am happy to report that child services was not called, no one was lost, stolen, or abandoned…..and we even enjoyed ourselves. Most of the time.

Our flight was scheduled to leave at 8:30 am. Alarm was set for 5:16am. Luckily, we were already up with the baby. She’d been up and down all night, ended up in my bed around 3am because I incorrectly assumed she might sleep better. She’s been cutting her incisors, and is the worst teether in the world.  At this point, hubby and I were looking at each other with dread in our eyes, so scared of what was in store for us on the plane.

I brought a large backpack as a carry on, with lots of compartments for diapers, wipes, toys, snacks, blankets, DVD’s, extra clothes. I had been collecting little toys and gadgets here and there for weeks. Cheap light up bracelets and necklaces, pipe cleaners, magnet boards, anything I thought might capture the attention of a toddler stuck on my lap for 4.5 hours. I wasn’t even worried about the 4 year old, and true to form, he was great on the plane. When not sleeping, he mostly played with his leap pad, stored in his own little backpack carry on.

This was going to be our second trip with baby Jenna, the first was to Disney when she was 11 months old. She was pretty good then, but I had no positive expectations this time for the flight,  being twice as long. Especially with her larger than life voice, her dramatic way of throwing herself to the floor and pouting when she doesn’t get her way, and that whiny-scream thing she does when she wants something she isn’t allowed to have.

Here is what happened.

She was great at the airport. We hung out by the windows to watch the planes and she stood on the back of the chair jumping and yelling at them.

I had the kids walking around as much as possible before boarding. Partly to release energy. Partly to make sure Jenna would pee or poop if she needed to. She will not do this if I’m holding her, even on my lap. I changed her right before we boarded.

We boarded almost last. I wanted to make sure we had the least amount of time sitting on the plane, waiting for take off. This keeps them from getting bored or restless too early. The new environment and people around has worked well with Sammy, and now with Jenna, to keep the kids quiet and busy looking around for a bit. Bonus if you have someone acting up nearby to focus on.

I kept the carry on under the seat in front of me, I never use the overhead compartments, it scares me to have the stuff I might need too far from me.

You can’t break out the DVD player or electronic games until after the flight is up in the air. Taking off is pretty exciting by itself, both kids liked looking out the window and feeling the plane going so fast. 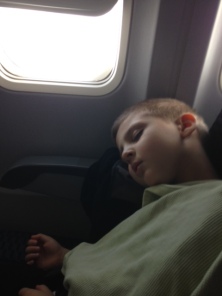 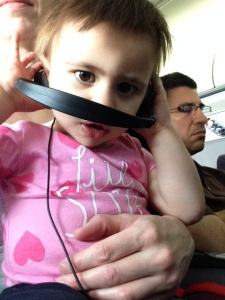 I tried to keep Jenna occupied with as much stuff OUTSIDE of our carry on as possible. She loved two things. My iPhone, and the headphones the airline provides to everyone. These two things kept her happy for a good hour, allowing me to slightly relax and think this might end up ok for us.

She is great at navigating through photos and video’s on my phone. I made sure I had plenty of videos of her and her siblings, and she scanned through everything, playing some over and over. I think the iPhone is probably the most valuable travel accessory for me right now. We also have songs downloaded that she likes, and played those (softly) so she could rock out in the seat.

She still uses a binky for sleeping, so after a good hour I gave it to her and held her close to me. This is our ritual for napping and bedtime, I like to hold her still to put her to sleep. She zonked out and slept for 2 HOURS!!  It was great, except the seat arm was biting into my back and side the whole time. It is pretty impossible to be comfortable for hours on a plane, holding a sleeping baby.

I brought some snacks, and I always bring sippy cups so I can transfer drinks into them for the kids when we are out. I did buy one of the boxed snack sets the airline offered, just because I love airplane food, all packed into it’s cute little compartments. Everyone got to taste something, and it wasn’t really expensive, I was surprised.

Just a side note…. wipes. You can never bring enough wipes when traveling with kids. And not just stored in one spot. Inevitably something will spill, or there will be an incredibly messy sneeze, someone will need a tissue NOW… and you can’t be looking through compartments, digging around for wipes. I brought a million packs, there were some in my purse, the carry on, and I left a pack out tucked into the seatback in front of me. They are soooo necessary to have easy access to.

The pressure starts to hurt my ears during the last 45 minutes or so of any flight. Sometimes, it is pretty terrible and stabbing for me, and I can’t imagine why everyone isn’t holding their heads and crying. I made sure the kids had snacks during this time, and drinks to help with it…but they both seemed completely unaffected.

Our landing was uneventful, and once safely on the ground, I let the kids share the window seat to look outside while we waited…..and waited…..to get off the plane.

Once off the plane, we of course had to get our luggage, and get a cab to our hotel. I’ve done the cab route, and I’ve done the shuttle or bus route. Usually, the shuttle is cheaper, and most places can book that into your trip ahead of time (like expedia)…but then you may end up traveling with lots of other people, stopping at other places before getting to your destination. With kids, I would rather pay for the convenience of getting to my hotel ASAP.

We stayed in Vegas for 4 days, 5 nights. I will blog about that trip, and what I found was good and bad about taking 2 kids to Vegas.

The flight home was scheduled at 11:30am, and I was most worried about Jenna falling asleep before getting on the plane. If at all possible, I want them to sleep on the plane. It worked out well, we got to the airport with a good hour to spare. The kids hadn’t wanted much breakfast, so I got a pizza and they both had some before we boarded. I again changed Jen’s diaper right before boarding.

This time, Jenna fell asleep right after take-off. She woke up after about 1.5 hours, right when Sammy decided to sleep. She and I had the window seat, and I try to get the very last row of seats on the plane. This is my strategy to help “block” us in, and also to cut down on the people we may be annoying. Being in the last row means you can only physically bother the people in front of you, there is no one behind you to get hit by flying toys, or bodily fluids.

I tried to get her to watch “Frozen”…. and she did. For about 15 minutes. Then, she wanted DOWN. I let her stand in front of my seat, there was really nowhere else she could go. This gave her a bit of freedom, at least she wasn’t stuck on my lap, being held…but she couldn’t possibly get under the seats in front of us, or past our carry on baggage to get into the aisle.

She looked out the window. I got out pipe cleaners…. she liked holding the bag, and then throwing them all over the floor. We played with the iPhone again….. I even took her into the tiny bathroom to change her diaper just to take up some time and give us something to do.

Don’t even TRY taking a bag of any kind into those bathrooms. Take your diaper, your wipes, and whatever you want to use to lie the baby on over the changing table. You will go into a tiny closet and there is NO waste of space in there. The changing table is directly over the toilet, making it impossible for me to pee at the same time the table is pulled down. This means she had to stand in front of me after changing her so I could pee. This means she tried her best to get out the flimsy folding door while my pants were down and she thought she could escape. I was afraid someone would think I was trying to get out, and open the door somehow from the outside. Bad baby.

Back in the seat during the last hour of the flight. Both kids were awake. Somehow doing ok. Hubby was playing with the 4 year old-twisting our used pipe-cleaners into a plane shape, Jenna was attempting summersaults across the seats (the armrests will move up, essentially creating a very small loveseat sized space for us all). I know you are required to wear seatbelts when seated, but apparently this is only for the grown ups.

She did start to have a mini meltdown right before landing, prompting me to search frantically for the “emergency binky”. I held her and gave it to her, and although she didn’t sleep, she did relax and calm down.

Although we made it, without loss of life or limb…… I was completely exhausted from the mental stress of WORRYING. Worrying about what might happen is usually worse than what actually happens. Which is fine.

Now that we are back, I’m so glad the flight part of our trip is over. Despite the fact that it went very smoothly for us (there was another kid, about 3, screaming for a good 30 minutes on the way home), I am not in any hurry to rush back onto a plane.

I have learned some things from traveling with kids though…and the one thing I know for sure….is that you just can’t predict what will happen. Our job as parents is just to be as ready as we can be….. and pray someone else’s kids are acting much worse than ours to take the pressure off.