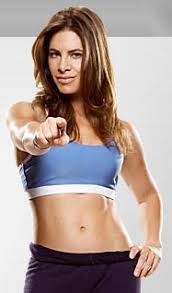 I used to work out with Jillian Michaels. In my basement.

It was nice, she was there for me every morning, or anytime I went looking for her, really.  I got to know her, and the girls she brought to work out with us. She understood my limited time, and totally did not mind pausing if a wandering baby pooped herself in the middle of our workout, forcing me to change her before we finished.

We even had names for our workout routines, my absolute favorites were: Banish Fat, Boost Metabolism, 30 Day Shred, Ripped in 30, and No More Trouble Zones. That last one, I loved it.

We were such good workout buddies. She really understood my needs.

Well, time went on, and somehow I started missing some of our workout dates. It was hard to meet up with her, when I had all these kids to DO STUFF with, and I’ll admit, some days I just got lazy.

Jillian doesn’t like lazy. I know that. If she said it once, she said it a thousand times….. “It’s only 20 minutes, you don’t get a break!”  I got tired of her saying the same things over and over, you know how it is. And some of those moves, was she kidding?

I loved her 3-2-1 system of strength, cardio, abs. But then when we moved up to a more challenging level I was supposed to live in a plank position, dying on the floor as she cackled at me, not even breaking a sweat. And Rock Star Jumps. Um…. I know she hasn’t carried a baby inside of her, maybe that’s why she’s not afraid of her uterus falling onto the floor when she does them. Or peeing herself, I don’t see her crossing her legs and taking a minute to make sure nothing is going to sneak out.

Sometimes I would just do my own thing while she and her girls illustrated just how in shape I was NEVER going to be. And the longer I lapsed between our workouts, the more I realized she must have been working out between our sessions, because she picked up right where she left off when we were last together, yet I was forced to start back on level one, or struggle through level two.

I began to dread working out with her.  To her credit, she never acted like she noticed. Just as perky and motivating as before. Maybe neither of us wanted to verbalize it….but it was clear, we were growing apart.

I haven’t seen Jillian in over a month. Yes, I took the cowards way out and just stopped showing up. I guess I find that easier than having “the talk”.

But I’ve kind of been missing her. It WAS nice having her there to encourage me in my quest for physical fitness. She never judged me for doing high knees instead of rock star jumps. Maybe I just got too sensitive. Maybe I just got lazy. Maybe I feel like my butt is turning into a pancake and I don’t have the money for cool laser lipo…yet.

So I think, one day soon, I’m going to try to stop avoiding Jillian Michaels. My plan? Well, I’m going to act like nothing ever happened. I’ll probably show up one morning soon, and just join in again. She’s way to professional to call me on it, so I don’t need to worry about explaining myself.

Until that day, I just won’t look at that corner of my basement where we used to work out. Might get awkward if we made eye contact before I was ready……