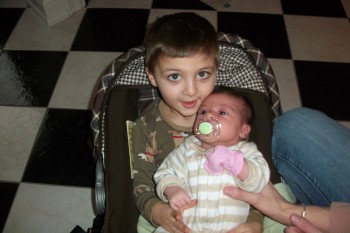 That thing you stick in the babies mouth to get them to stop crying. When they need some nonnutritive sucking. When you need a break. I didn’t use one with my first 2 kids….so I must have thought I was doing something right, or better than those that did. Because I was stupid then.

So when I had the 4 year old, and my husband and his family really really encouraged the pacifier, and even the wearing of the pacifier with a string that clips to his clothes… I felt really uncomfortable about it. He was the first baby I successfully  nursed, and I thought maybe he needs the extra sucking practice? Maybe he needs that to be comforted? Lots of kids DO need it. I remember the actual day he really TOOK to the pacifier. Like, if I took it out of his mouth he would scream until I put it back. He didn’t want to nurse…he wanted the pacifier. I didn’t like it at all.

I saw that pacifier as a crutch, almost a drug. Baby Heroin. I didn’t like him NEEDING that. So I limited it’s use, after the newborn period and colic was over….only nap and bedtime.

I can’t tell you how  many fights I had with my husband about that stupid pacifier. I would go somewhere and come home to find Sammy running around with that thing in his mouth. I really, really had an issue with it. I strategized how to get rid of it, researched the best age to do it before the binkie becomes more of a “habit” than a needed comfort.

I preached to my husband about all the things I read, and he looked at me like I was crazy. He didn’t see the problem. Let the kid have a pacifier, geez.

I got rid of Sammy’s when he was 15 months old. I waited until Daddy was on a trip away from home so he couldn’t interfere….I knew he could never stand to see the baby upset about it. Truthfully…. we had a couple nights of waking up a lot…and then nothing, he was fine.

So here comes the last one. baby number 4. As any parent of multiple kids will tell you, your standards seem to be a lot less rigid with each new addition.

I made sure with Jenna that we had plenty of pacifiers. I no longer saw it as my enemy, and sometimes I had to pop it in to buy 10 minutes before I could feed her when I had a screaming toddler to settle down first.

But… 15 months went by, 16, 17….20, 21…. and I am telling myself that I need to get rid of that thing… but I admit… I am so lazy now. Beaten down. Tired. I don’t WANT to deal with what might happen if I take it away. Now that she looks for her binkie at bedtime. although it does nothing to keep her sleeping all night, and she still ends up in bed with me, or loudly whispering that she wants to go downstairs at 6:30 in the morning.

Well, hubby was on a trip this week. I prepared to dispose of the binkies. I did nothing the first couple nights… and finally 2 days ago just brought her to bed without it. she asked for it. I told her it was broken and yucky. She slept. Now, I’ve collected the binkies around the house…and they are all in a cabinet and have not been used in 2 days.

this feels so weird.

Are we really done?

I don’t feel super excited or relieved to have the horror of the binkie behind us. I feel like it’s not real yet. I need to throw them away, but I’m afraid. Maybe it was just too easy. If I don’t have that, what else can I hyper-focus on??!!

I’m sure I’ll think of something.